Currently, there are a number of problems with Micro LED, and regardless of whether it is process technology, inspection standards, or production costs, they are extremely distant from commercial applications. However, the most significant challenge is finding ways to enter into mass production in order to decrease manufacturing costs, and this link is known as “ micro led mass transfer.” 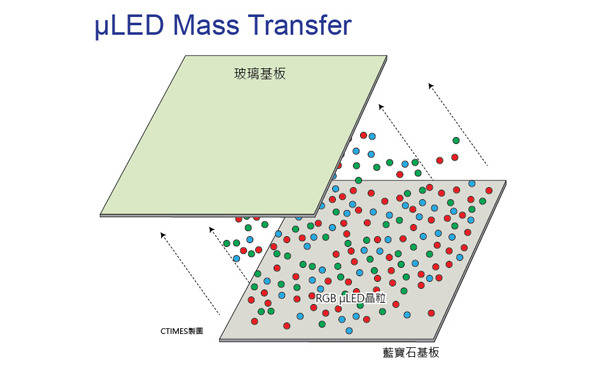 Micro LED is short for Micro Light Emitting Diode, and it can also be written as “ μLED.” The main difference between it and regular LED is of course size; however, there is still no standard measurement for the size dimensions that something must be in order to be considered Micro LED. Consequently, each manufacturer has their own representation of the criteria. Taking Epistar Corporation as an example, a regular LED chip is 200-300 micrometers, whereas a Mini LED (the predecessor to the Micro LED) is approximately 50-60 micrometers, and Micro LED is 15 micrometers.

Cost and Mass Production are the only Challenges

Because of the variation in size, each application is also different. Regular LEDs mainly are used for lighting and display backlighting modules. Meanwhile, Mini LEDs are also utilized in backlighting; however, they are used in high-end consumer products and automotive markets as well. For instance, Innolux Corporation’s AM miniLED is used in automobile display panels. As for Micro LED, the concepts behind its applications are completely different from the aforementioned ones. It is a completely new technology, and its rival technology is OLED.

From the perspective of technological specifications and application concepts, the brightness, reaction speed, power consumption, and durability of µLED are all superior to what is currently on the market, and it could be considered to have the potential to completely replace LCD and OLED displays. However, the only problems are manufacturing costs and mass production capabilities.

The greatest current challenge to manufacturing µLED is how to take a huge amount of micron-grade LED chips, and place them on a target substrate or circuit using high-precision equipment. This is what is referred to as “mass transfer.”

When describing a chemical or physical mechanism, mass transfer is a type of transporting phenomenon which signifies that a large number of points (molecules or particles) are moved from one end to another. This can occur in one stage or multiple stages, and it involves a liquid or a gas phase. It also sometimes occurs in solid matter.

A classic example of mass transfer is when the evaporation phenomenon of water “vapor” enables particles of moisture to move to another surface. In a similar sense, the same holds true for dispersion.

During the production of µLED, millions or even tens of millions of micron-grade LED chips must be accurately and efficiently transferred onto circuit boards. For example, for 4K televisions, as many as 24 million particles (4,000 x x RGB three color calculation) must be transferred, and even if 10,000 pieces are transferred at a time, this process needs to be repeated 2,400 times

Taiwan’s Industrial Technology Research Institute has initiated the research and development of huge amounts of related technologies, and the Electronic and Optoelectronic System Research Laboratories is mainly responsible for these endeavors. Head of ITRI’s Electronic and Optoelectronic System Research Laboratories, Dr. Chih-I Wu explained, “currently LED and display panel manufacturing is already considerably mature, and the main difficulty is finding ways to take large amounts of µLED particles to carry out mass transfer. “

Dr. Chih-I Wu also pointed out that even though producing micron-sized µLED chips is not easy, there is equipment that can be used to do it, and the real problem lies in quality of yield and quantity. For instance, when red LEDs are shrunk down to become micron-grade, there is a problem with silicon materials becoming fragile. Nevertheless, it can still be accomplished, and the only solution which is missing is an effective mass transfer solution.

Because the equipment needed to carry out mass transfer with good yields and in large amounts is highly technologically challenging, at present companies such as Apple, Samsung, and Sony are all actively engaged in research in hopes of making a breakthrough.

Dr. Chih-I Wu also stated that the principle behind achieving mass transfer is actually very simple. First something must be produced which can accurately absorb µLED chips, and then they must be transferred onto a target back panel and be released with precision. In principle, this can be done using vacuum, static, sticking, UV or electronic effects.

The key problem lies in how high of a yield can be achieved and whether or not the production capacity tallies with the cost.

If production capacity is not a consideration, contemporary mass transfer equipment such as those which employ the “Pick-and-Place” method can be utilized to produce µLED display panels; however, the cost is extremely expensive. Therefore, other than for applications or clients for whom cost is not a sensitive matter, it is difficult to find room for companies to develop this technology.

To date there have been a few companies which have announced some initial success on small-sized boards, such as Taiwan’s PlayNitride, Epistar, and LuxVue (which was purchased by Apple), Japan’s Sony, and South Korea’s Samsung. Furthermore, Taiwan’s AU Optronics Corporation has developed the world’s highest resolution 8” Micro LED display. Nevertheless, these companies have not made these accomplishments through the use of mass transfer forms or technologies.

Compared to μLED, which urgently requires huge transfer technology for a solution to its mass production issues, Mini LED, which has 50-60 micrometer chips, has the capacity to be produced entirely using existing manufacturing equipment. As a result, LED manufacturers are currently choosing to use it as a transitional product, and even Samsung and Sony, which have launched Micro LED products in the past, may manufacture Mini LED products which can be produced using existing equipment.

As early as 2009, ITRI began research and development of µLED technologies; however, it was just a start and they did not move in the direction of mainstream display applications. Nevertheless, as the market and technology has progressed, they have gradually become aware of its market potential.

“At the time we believed that it was possible with OLED, and we were certain that it could be done with LED,” said Dr. Chih-I Wu.

He pointed out that in theory LED could replace all of the OLED products of today, and the only problem is manufacturing costs and what is known as C/P value. If the prices of the products that we produce are excessively high, then interest will be lacking, and there will be no development value. A few years ago this was the situation for most OLED televisions.

As for mass transfer technology, Dr. Chih-I Wu confided that ITRI already has some related solutions now; however, he is not able to elaborate on the situation and only replied that this year there will be some related technological publications and urged everyone to wait and see.

However, he also believes that currently the most feasible manufacturing processes for mass transfer are ones using 6-inch-8-inch chips which are primarily for small-sized display screen applications. He believes that large display applications can only be made by putting smaller pieces together to solve manufacturing cost problems. As for the forms of technology, he thinks that transfers will be made with adsorption transfer methods, Van Der Waals, or other forces.

The µLED Application Market will have an M-Shaped Development

Due to the difficulty of developing mass transfer technologies and constraints on mass production and yields, the µLED application markets will have an “M-shaped” development, meaning that they will first began from very large and very small dimensions before finally being gradually developed for the largest-sized consumer electronics and televisions. However, whether or not they can be developed for mainstream consumer product markets and even replace the current OLED televisions and LCD televisions of today will depend on the cost of production at the time.

Dr. Chih-I Wu stated that because LED’s are characterized by having smaller light emitting areas than the size of devices, they are extremely well-suited to being placed together to produce extremely large display surfaces, and this is particularly the case with large-sized display screens in outdoor or public areas. In addition, these applications have sensitive cost considerations and will therefore be the first commercial markets for µLED screens.

After they are utilized on large-sized screens, they will be used in applications with extremely small-sized screens, such as wearable devices and AR/VR devices – especially in AR/VR devices. Dr. Chih-I Wu went on to explain that µLED characteristics, such as its brightness, low power consumption, and high response speed make it extremely well-suited for use in these applications. Hence, it can not only overcome problems associated with displays during daylight but also improve power consumption while simultaneously satisfying the high-speed display requirements of computer games.

All in all, Dr. Chih-I Wu believes that µLED will enter into consumer markets and be especially common in regular home electronics markets. He believes that currently the manufacturing costs of µLED are extremely expensive, and even if the manufacturing processes mature, the costs will still be higher than those for LCD screens. Similarly, even if the display performance is excellent, it will still be difficult to persuade consumers to buy them. Therefore, we will still have to take some time to observe their development.