Micro LED technology is to make the LED backlight thin film, miniaturization and array, it can make LED units less than 100 microns, and OLED can be achieved as a separate address for each pixel, individually driven light (self-luminous). The advantages of this technology are low power consumption, high brightness, high color saturation, fast response, long life, etc. It is considered as a strong contender for OLED technology.

Panel companies in Taiwan have been actively promoting the development of Micro LED technology. As Korean factories LG Display and Samsung Display currently monopolize the entire OLED panel area, mainland China panel makers are also investing heavily in OLED panel technology, so Taiwan panel makers are very hopeful. In the Micro LED technology to achieve some achievements which is to achieve a curve overtaking.

Hon Hai Group spurs Micro LED, Innolux, Rongchuang, and Fan Xuan San Road. Innolux’s advantages in panel technology helped Rongchuang to become a key player. He not only undertook the development of Micro LED technology, but also participated in an important transfer of investment. The newly joined Fan Xuan, the European team took the initiative to find the door and cooperated in the development of a critical mass transfer. Transfer technology.

Micro LED market is promising, and the industry reported that Apple’s iPhone display will gradually shift from LCD to OLED to Micro LED. And Samsung has announced that the world’s first Micro LED modular TV “The Wall” will be open for pre-order and is expected to be in the third quarter. Shipped. Hon Hai Group at this time spread the relevant layout positive, intended to win the iPhone future panel orders, synchronized with Samsung in the application of large-size areas such as television to compete, accumulate energy.

Industry sources pointed out that Micro LED technology involves both the panel and LED industries. Hon Hai Group must mobilize related resources and process equipment is also a key issue. As Micro LED is faced with a huge transfer problem, the world’s largest independent microelectronics research and development agency, IMEC took the initiative to find a fan and cooperated in the development of a “grain implanter” experimental machine goal.

IMEC is hailed as “the important head behind TSMC, Samsung, Intel and Huida” and has worked closely with semiconductor manufacturing processes and materials. Sail declared that there were European units looking for the door and the commission to turn the technology into process, but the two parties had confidentiality reached agreements and could not disclose details.

Innolux is backed by panel technology. The initial stage is Mini LED to attract the attention of major car manufacturers. Ding Jinglong, head of the executive vice president and chief technology development center, said that Micro LED will be the next generation mainstream. Before the technology matures, Innolux will lead the development of AM Mini LED panel and actively develop other small and medium-sized applications. Before the first commercialization, and gradually transferred to Micro LED.

According to industry judgments, Apple and Hon Hai Group will work closely together. Innolux and Rongchuang will play a pioneering role. Rongchuang is an important LED-to-investment company of Hon Hai Group. In conjunction with the Group’s resource integration, it cooperates with panel customers such as Innolux and Sharp and will launch Mini LED backlight panels in the third quarter of this year at the latest. Rongchuang is also actively developing Micro LED technology and is fully committed to mass production.

In addition, on the 8th, the LED epitaxy factory Guanghan shareholders meeting was re-elected to the board of directors, and the Hon Hai Group was interested in intervention. In the end, Rong Chuang won the Guanghan two-seat directors. Representatives Rongchuang, chairman Fang Rongxi and director Zhuang Hongren, respectively, highlighted Creation of Micro LED in Hon Hai Group plays a key role.

According to the research, the potential opportunities of Micro LED are huge. If Micro LED fully replaces the components of LCD, the market size will reach 30 billion to 40 billion US dollars (approximately NT$900 billion to 1.2 trillion) to attract global technology companies and heavyweight research institutions to actively invest.

ITRI also assisted companies such as Jingdian and Xinxing to enter into the field of Micro LED. Wu Zhiyi, director of the Institute of Electro-Optical Systems of the Industrial Technology Research Institute, said that Micro LED is currently facing the key technical problem of “giant mass transfer”. For the first time, ITRI exhibited at the computer show last week. (Invested by Jingdian, AUO, and UMC), the “ultra-fine-pitch Micro LED indoor display” has been developed to attack the 110-inch indoor display market.

Wu Zhiyi pointed out that from Taiwan’s IC design, LED manufacturing, display panel factory, to system integration vendors, the development of Micro LED’s industrial chain resources is quite complete, and it has deep international competitiveness.

Micro LED 5 applications should be “differentiated”

In fact, there are up to 5 different types of display applications for micro LED technology. The difficulty of each application and the market process is very different.

Firstly, the first major category is the small and medium-sized display applications demonstrated by AUO’s SID Display Week 2018: The target market is a mobile phone screen, and the competitive technology is a flexible OLED display. For such applications, micro LEDs must achieve a resolution of more than 400 PPI, a flexible screen, a huge output scale, and economy, and it is possible to compete with the OLED technology that is booming. AUO’s so-called “no timetable” is mainly focused on products in this market.

Second, micro LEDs can also be applied to smaller screens. For example, VR display. The main future competition technology in this area is the OLED of silicon-based backplanes. Its core technical feature is a higher PPI, and even reaching 2000PPI can achieve the desired near-eye display effect. Obviously, micro LED’s technical capabilities in this area are still not up to standard, and mass production will not be able to talk about it.

Third, micro LEDs may also be applied to larger display devices, such as color TVs. In this large-scale application, the PPI pixel density of the micro LED is not so high, and the prior art is fully capable. However, under the background of LCD TVs moving to a large size of 55-75 inches, and OLED large-size technology continuing to grow in popularity, the cost-effectiveness of micro-LEDs is a “big problem” in the color TV field.

Fourth, micro LEDs can be used in the large-screen display market. For example, the black color LED large screen that Sony introduced in 2016 can be considered as a product that meets the micro LED standard. In the field of large screens with large display areas, micro LEDs do not need to directly compete with liquid crystal and OLED flat panel display technologies. Because the latter’s splicing display can’t avoid having a screen gap. At the same time, the engineering market has lower requirements on the scale and economics of micro LED output. The future of small-pitch LED display technology from the surface to the COB transition, and then enter the era of micro LED, is a recognized road map. – In fact, this aspect has already been “in production”, but the LED crystal particles did not shrink to 10-50 microns, but instead uses 100 to 300 microns particles.

Fifth, micro LED technology can also be used for LCD backlights. Taiwanese manufacturers have launched e-content high-end liquid crystal display products based on this technology. In theory, a liquid crystal display system using a micro LED backlight source is desired in color, HDR, and the like to achieve an effect comparable to OLED. In the backlight market, micro LED technology is also known as mini-LED: The latter’s meaning is mainly that the LED crystal particle size and arrangement density of the technical indicators more relaxed, which is conducive to micro LED “mass production.”

In short, the application types of micro LEDs are quite different. PPI index from the near-eye VR of a thousand or two PPI to the backlight or engineering large-screen dozens of PPI, the technical difficulty gap is very large. In the face of such a broad market setting, it is clearly impossible for micro-LED products to “breakthrough in one-off volume production”. At present, the backlight and engineering large screens are the green niche markets for micro LED related technologies: “low-level start-up and rapid landing.”

How the Micro LED Goes in the Future: Looking at the Project Screen

Since 2014-2017, the increase in the LED display market for small gaps has been above 60-80%. In 2018, only the domestic small-pitch LED display market is eager to reach 10 billion yuan. With the development of a smart society, big data and smart industries, the future growth of large screen displays will be “better”. 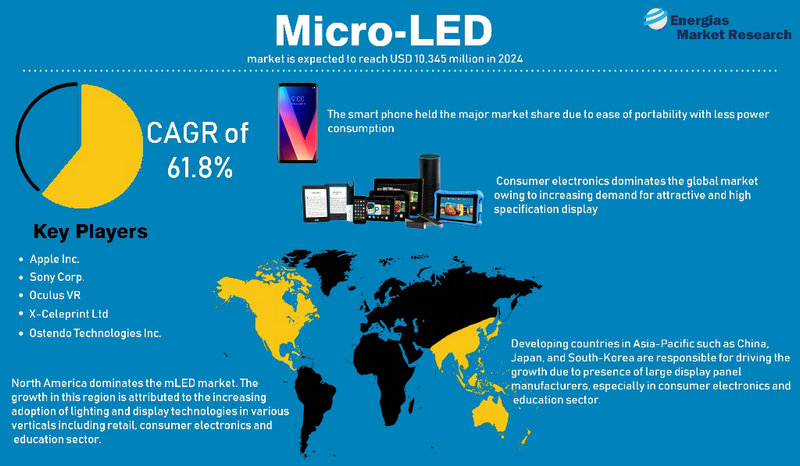 Based on this market awareness, the author believes that the best way out for the current micro LED is in the engineering big screen market. In this market, micro LED do not need to have extremely high PPI indicators. High PPI is the biggest difficulty for micro LED display technology. At the same time, it can also say goodbye to the “positive competition” between OLED and LCD. This is the biggest competitive pressure of micro LED technology. Even the application of the micro LED in the engineering market does not require too much economical cost – if the cost per square meter can be reduced to 30,000 or so (the corresponding liquid crystal display product is 2,000 yuan), it can be widely popularized.

For a new display technology, its growth prospects do not only depend on “technical” factors. It also depends on factors of competitiveness and market affordability. In the engineering market, micro LED does not show its inherent “extreme performance”, but it has the “feasibility” of competitive factors and market acceptance factors.

The latter is just like the liquid crystal backlight display products of micro LED (MINI-LED) technology introduced by Taiwanese companies at present: appropriately lowering the technical threshold and seeking market feasibility. However, the LCD backlight market is not a “long-term market.” Under the general trend of LCD to OLED transition, there is no “strategic future” for backlight-type products. The application of the micro LED in the backlight market can only serve as a short-term strategy, the first pot of gold and an expedient measure to win opportunities for further innovation.
It also means that in the conventional display market, micro LEDs cannot evade positive competition with OLEDs. With the advantages of OLED’s initial investment, scale, and maturity, the future of the micro LED camp is not optimistic. On the contrary, in the global engineering large-screen market, micro LED can “advance without rivals” and have a better future.

The author believes that AUO is more detailed in the above analysis. This constitutes AUO should face the competition between OLED and LCD “type of micro LED product ” and “there is technology research and development,” but “no production. “Timetable” attitude. On the other hand, COB-LED large-screen products are on the cusp of 2018, and the introduction of more advanced technologies such as micro LED is exactly the right time: micro LED is expected to be the first to land in the large-screen engineering market.